Hi Everyone! If you like Burglars, Inc. you might like to try some of the puzzle games that inspired it! Here’s a quick blog highlighting some of our favorites.

This gem was created by Capybara Games for the Nintendo DS in 2011. The developers took their unique puzzle mechanic from their previous game, Critter Crunch (also very fun), and wrapped it in high quality fantasy trappings. The story is a bit generic, but the art shines and the gameplay is original and utterly addicting. The DS version had a really great vs mode too!

Originally released on the Nintendo DS, PSP, and Windows in 2007, Infinite Interactive took a really simple match 3 puzzler, added some new and innovative features, and mashed it together with a story-driven fantasy epic into a fully featured RPG. It was amazing how far they stretched the simple match 3 mechanic and still kept the game fresh. The story was forgettable, the art was standard fare, but man…what an addicting game. There have been a few sequels and spin-offs, but in my option, the original is still the best.

Although this series has some puzzle-like elements, it plays more like an interactive detective novel. The first title was launched way back in 2001, but new games have continually been released by Capcom every few years, including 2016’s Phoenix Wright Ace Attorney – Spirit of Justice. The art and the writing are top notch, but what really makes it memorable are all of the zany characters and their bizarrely compelling dialog. My personal favorites in the series are Phoenix Wright: Ace Attorney – Dual Destinies and Ace Attorney Investigations: Miles Edgeworth, but all of them are great. 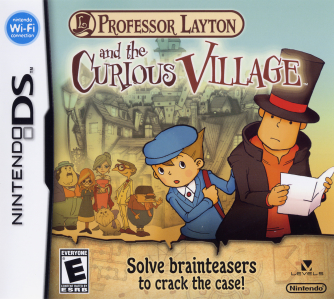 Professor Layton and the Curious Village was easily my favorite game of 2008 when it was released in North America. It has a unique setting, interesting characters, brilliant puzzles, and immaculate production values from start to finish, including a quirky and stellar soundtrack. It was developed by the pros at Level-5 and a new game in the series pops up every few years. All of them are worth playing. If you have a DS or 3DS and haven’t tried a Professor Layton game, do it. You won’t regret it.

There’s way more games that we can list that influence us as developers, but those are the ones we looked to most often when figuring out how to make Burglars, Inc. the best we could. What are your favorite puzzle games? Let us know. Happy burgling!

Comments are closed, but trackbacks and pingbacks are open.

Burglars, Inc. is a brand new type of puzzle game from the two-man indie developer Fuzzy Orbit Games. It features a full cast of characters in a story driven experience. Follow the adventures of Chase and her burglar friends as they crack safes, pick locks, hunt for trophies, nab cash, and burgle sweet loot throughout a crooked city. Be quick, be careful, or you'll be busted!

- Experience a brand new type of puzzle game, built from scratch for the iOS
- Take part in an original story-driven caper
- 200 unique puzzles to beat - crack safes, pick locks, hack computers, and more
- Gear up with the latest tools and gadgets
- 50 ranks to gain and 30 achievements to unlock in over 15 hours of gameplay
- No ads and no micro transactions - try it for free!